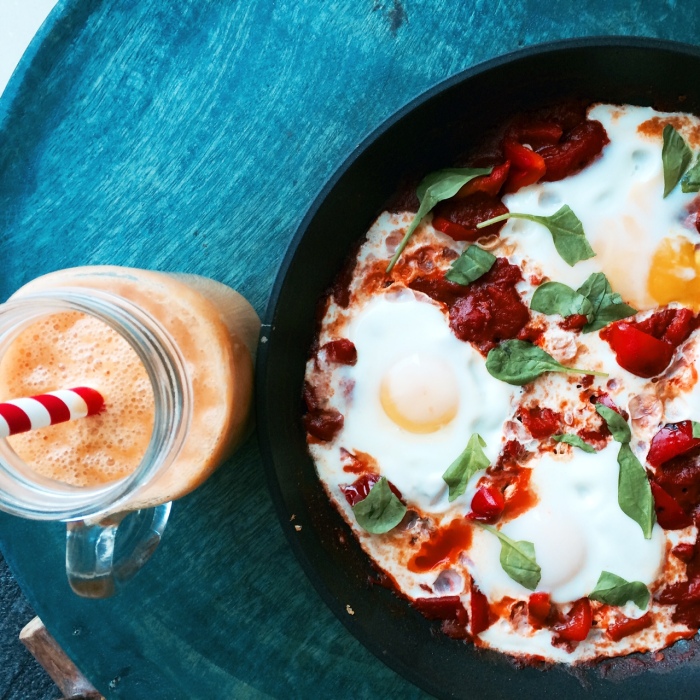 Nothing beats a yummy hearty Shakshuka for breakfast or brunch! It’s one of my favourite dishes to make in the weekend.

Shakshuka is a staple dish in Tunisia, Libya, Algeria, Morocco and Egypt and is traditionally served in a cast iron pan or tajine. It is also popular in Israel, where it was introduced by Tunisian Jews. But apparently the dish was invented in the Ottoman Empire. There are many different versions of Shakshuka; some like to add artichoke hearts, potatoes, broad beans or spicy sausages. Here’s one of the versions I like:

In a frying pan, heat up some olive oil and fry the garlic until it turns slightly brown. Add the cumin, cayenne pepper & black pepper and continue frying for a few seconds. Add the chopped tomatoes and capsicum and cook for about 2 minutes stirring regularly. Using your stirrer make space within the tomato sauce for 4 eggs, then crack the eggs into the spaces. Leave the eggs to poach for 2-3 minutes (depending on whether you like your eggs well done or runny).

Crumble the cheese on top evenly then sprinkle some spinach right at the end. I don’t like to over cook the spinach so I tend to add it at the end just before serving. Season with sea salt to taste. Serve on the frying pan itself with some toasted bread and fresh orange juice. Mmmmmm Finger licking good!

Experimenting with Tofu these days! I’m trying to cut down on eating meat and tofu is a great alternative as it adds texture to the dish. Here’s something I made yesterday - rice noodles with bok choy, shiitake mushrooms, mixed bell peppers, spring onions and tofu all cooked in a sticky Tom Yum sauce and garnished with coriander leaves & sesame seeds. Was so delish! 😋
I've never attempted to cook a #turkey and don't think I ever will! But thanks to the @themattarfarm you can enjoy the most #delicious #smokedturkey delivered to your doorstep- perfect way to host a dinner party. They specialise in #smokedmeat so if you're not a fan of turkey they do an amazing #brisket!
Far Eastern inspired #veg #stirfry - mix of red onions, butternut squash, green beans, mushrooms & kale cooked in sesame seed oil, garlic, ginger, soya sauce & rice vinegar .. so so easy & quick to make! #foodiologyblog